What is Classical Greek Theatre?

Theatre history owes most of its roots to Ancient Greece and the tradition of honouring their gods through festivals. In cities like Athens, citizens would perform songs and present plays as part of these celebrations. Festivals would traditionally include a set of tragic plays with a comedy thrown in for light relief; the Greeks were also rather fond of their satyrs (satires).

Over many years, the presentation of these performances became more elaborate and actors, directors, and dramatists (all originally the same person) expanded to incorporate some rather elaborate conventions. Actors wore masks with exaggerated features and there were strict rules on how performances could be staged.

The Greek chorus evolved from a necessity of having a limited number of actors allowed on-stage, into the central core of the play. An active part of any Greek theatre production, the chorus offers objectivity on the action being both narrator and witness to the play.

Greek theatre dates to around 700BC with the oldest surviving tragedy being Aeschylus Persai which was written in 472BC. 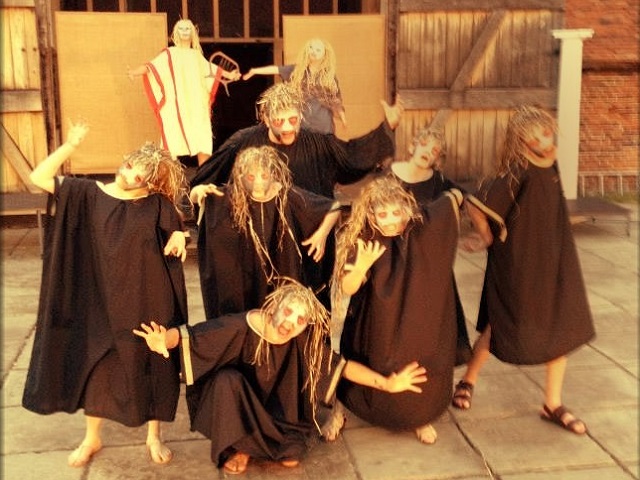 Our next Greek Theatre Course will run in the summer of 2026.

The course is a practical exploration of the Golden Age of Greek Drama and covers both tragic and comic theatre. Exploring the social and political power of drama within the ancient culture students will learn about the use of mask, conventions of staging and structural elements of Greek Tragedy. With our characteristically active approach we will cover expressive movement and voice work as well as the importance of the chorus within a performance. The course offers students an intensive and challenging week in which they will work individually and in groups to learn and extend their performance skills. Groups will work together to produce a fully developed, rehearsed and stand alone piece of Greek Theatre.

Students receive tuition from drama specialists who have also produced written material that can be taken away from the course. We have found that many of our past students have found this material invaluable when accessing higher-level education.

The Classical Greek Theatre course is particularly suitable for those students who are studying the AQA Drama and Theatre Arts and Edexcel Drama A levels but will also benefit any students who have a devised element to their GCSE or Diploma courses.