What is Physical Theatre?

A genre of theatre that uses physical movement as the primary form of telling a story, Physical Theatre encompasses a wide range of techniques which include:

A versatile and powerful form of theatre, many theatre companies use elements of this style in their performances including notable practitioners Frantic Assembly, Theatre Absolut and DV8.

A highly visual form of storytelling, Physical Theatre is regarded as a contemporary genre but has roots which can be traced back to the very physical performances used in Commedia D’ell Arte. Performed in mask, Commedia is a very stylised genre of theatre but was the forerunner of much of the same skills that have been developed in modern mask performances. 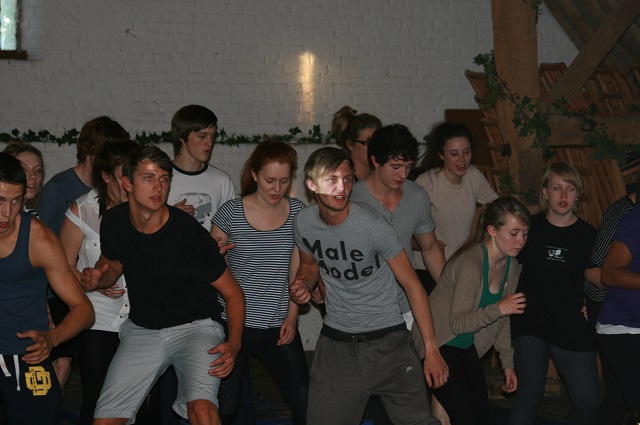 Our next Physical Theatre Course will run in the summer of 2024.

We have designed a course which aims to give students access to the work of contemporary practitioners and companies such as DV8, Butoh, Complicite, Frantic Assembly and Berkoff. The course is a physically challenging week and requires our students to have a good level of fitness and stamina to complete the demanding workshops. Together we explore the role of the performer within Physical Theatre to create fluid storytelling, symbolic emotional and psychological resonance or express abstractions. The course is built up over a series of workshops each of which builds upon the others to provide students with a range of options from which they can devise and perform their own piece of ensemble theatre.

The course is suitable for all students studying Drama and the Performing Arts, irrespective of level, and is an excellent opportunity for those gifted and talented individuals who are looking for a challenge to extend their skills. The course has produced some exceptional final performances over the last few years and the standards have been of a professional quality.